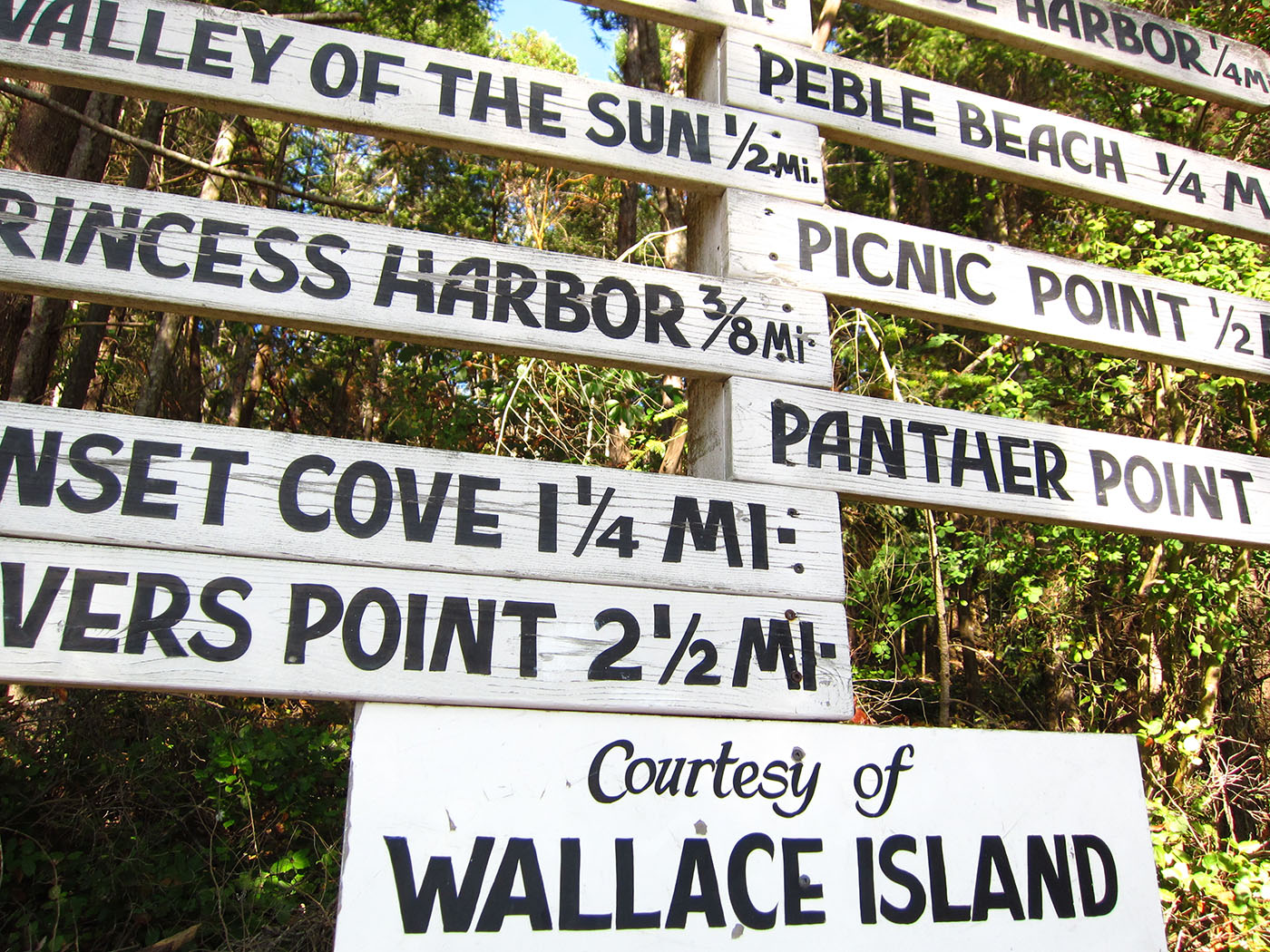 Last year Nik and I read an awesome book called “Once Upon An Island,” by David Conover. It’s a non-fiction account of a young American couple’s adventures in buying small Wallace Island in British Columbia in the 1940’s. Against the wishes of their friends and family they sold most of their possessions and, with very little money, worked hard to build a resort and make ends meet. The book has very candid accounts of their mistakes and triumphs. I highly recommend it!

Part of our excitement for sailing around the Pacific Northwest and embarking on our own adventure was kindled by reading “Once Upon An Island.”  We were eager to experience the island and see the sights we had read about.

Conover Cove is located on the Southwest side of Wallace Island through a sliver of an opening between underwater shelves of sandstone. Our keel draws 5 feet so we made sure to head into the popular anchorage at high water.

It’s always funny to see places you’ve only read about. Somehow I expected it to be much bigger. The cove was beautiful and quaint with families camping on shore, a small dock, a brown house overlooking the water, and boats slotted closely together at anchor. All boats were stern-tied to allow more space. To follow suite, we figured out where we wanted to “park” dropped anchor well in front of the spot and reversed into it. We mounted our giant spool of yellow 1/2″ poly line above our swim ladder and Nik rowed ashore with an end while I helped feed it out. On shore he wrapped it around a deadish tree and rowed it back to the boat where we pulled it tight. Unlike being only anchored by our anchor line, the stern-tie suspends us between the shore and our anchor and eliminates swing. By bringing the line back to the boat rather than simply tying it to the tree, we’re able to pull the line free with ease when we’re ready to shove off. Plus, the poly line floats on the water…so there’s no worry about tangled props. I love clever boating techniques!

Nik coming down the hill from wrapping the stern-line around a tree. 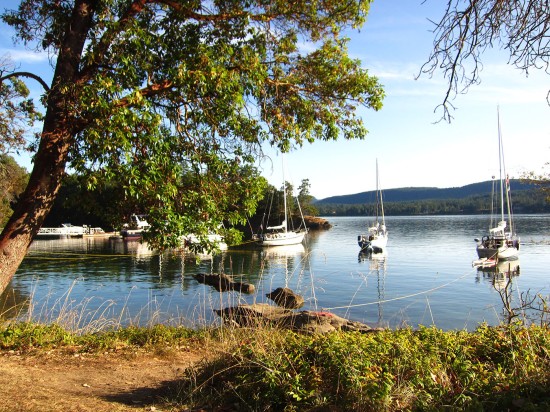 Our tight anchorage. Carmana is the third boat in from the right.

Here are a couple shots of our stern line set-up. 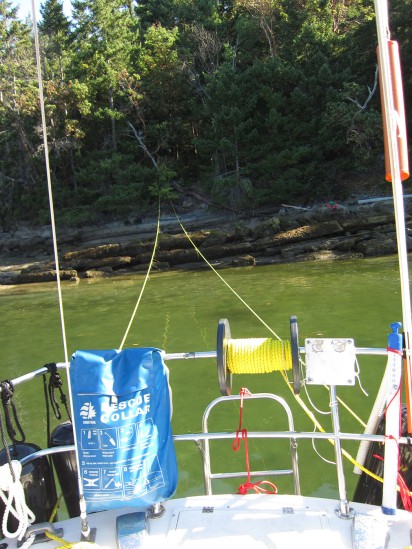 View from one of our portlights.

We were only about 20 feet from our neighboring boats and maybe 40 feet from the loud kids running around on shore. We rowed over to the dinghy dock, petted a nice dog, and set off to explore the island.

All signs point to a very easy scenic walk.

The Conover’s house. David Conover built on to an existing one-room shack. 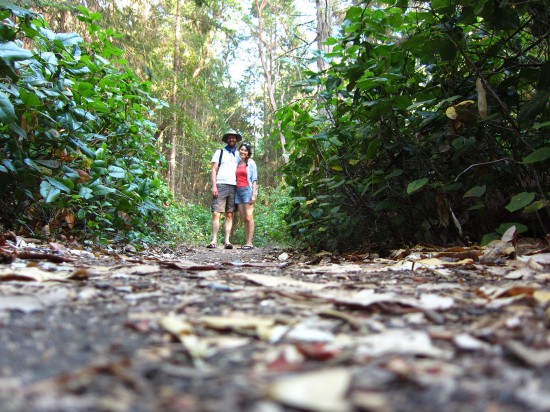 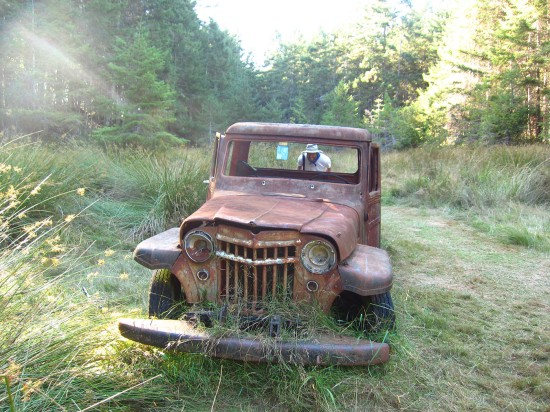 After David Conover sold the island, it was bought by developers. I’m foggy on the facts, but somehow it was either sold or donated to BC and made into a public park. Sadly, a lot of the resort cabins were taken down, but a couple still stand along with the Conover’s house. An interesting surprise was a structure completely covered by scraps of drift wood, dated, and inscribed with boat names. We hadn’t read about it in any of our cruising guides’ accounts of the island and we were happy to leave our mark. More about that in the next post. 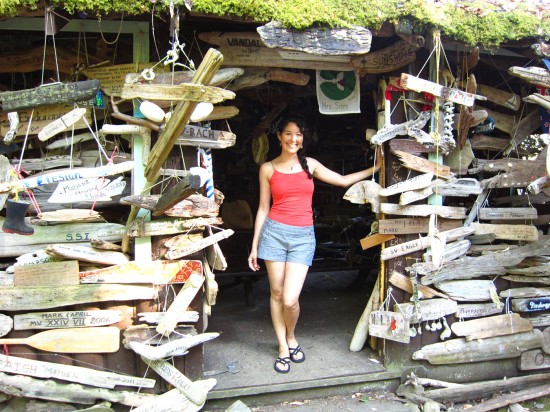 Another highlight was coming across a little raccoon along the shore. We were in our row boat and watched from a very short distance as he felt under rocks and stuck his hands into crevices looking for delicious morsels. At one point the majority of his body disappeared behind a rock shelf and we could only see his tail. He seemed to be struggling and using all his strength to pull something out. His tail kept straightening and pointing upward as he used it for balance. Finally he was victorious and out he came with a big crab! It was quite a fight and I think I heard him yelp from a pinch, but the raccoon won and the crab soon stopped moving. He crunched on it for only a few minutes and them walked away leaving the majority of the crab unchomped. Then he went back to his search and we followed along. I guess that crab will make a nice meal for someone else.

Here he is battling the crab.

He quickly went back to the search. That’s a starfish by his leg…but he’s clearly not interested.

Me and my raccoon friend. 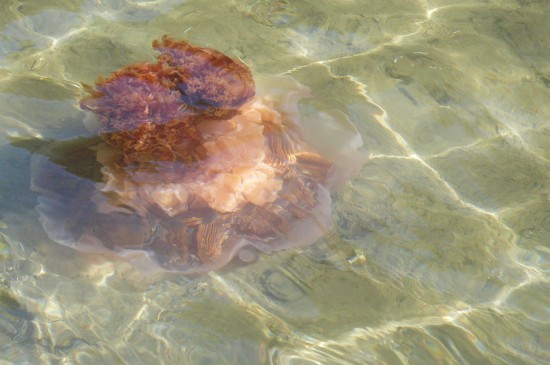 We saw many jellyfish. This one was upside down in shallow water. So frilly! 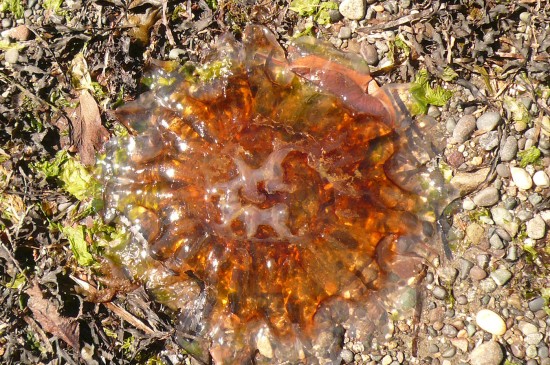 This jellyfish was on shore. It was about a foot across.

I really liked these washed up pinecones. They look like grubs or something. 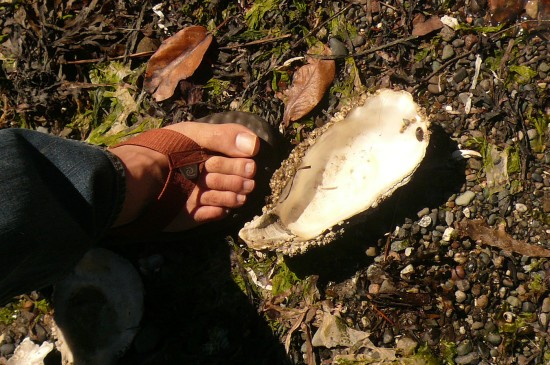 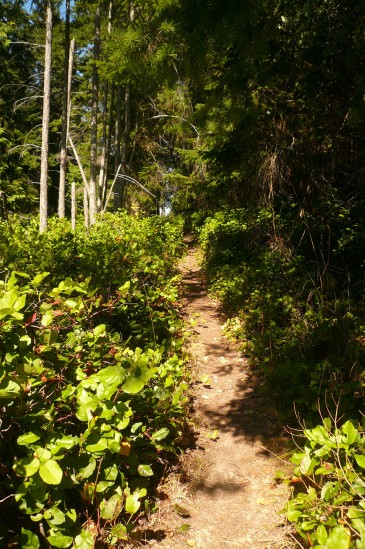 The paths were lovely.

We saw a mama raccoon with a couple babies beach combing as well, but couldn’t get a good photo.

Wallace Island is a very popular spot and we were thankful to find a little wiggle room for Carmana to settle in at Conover Cove.

It is a memorable place. More on that to come…